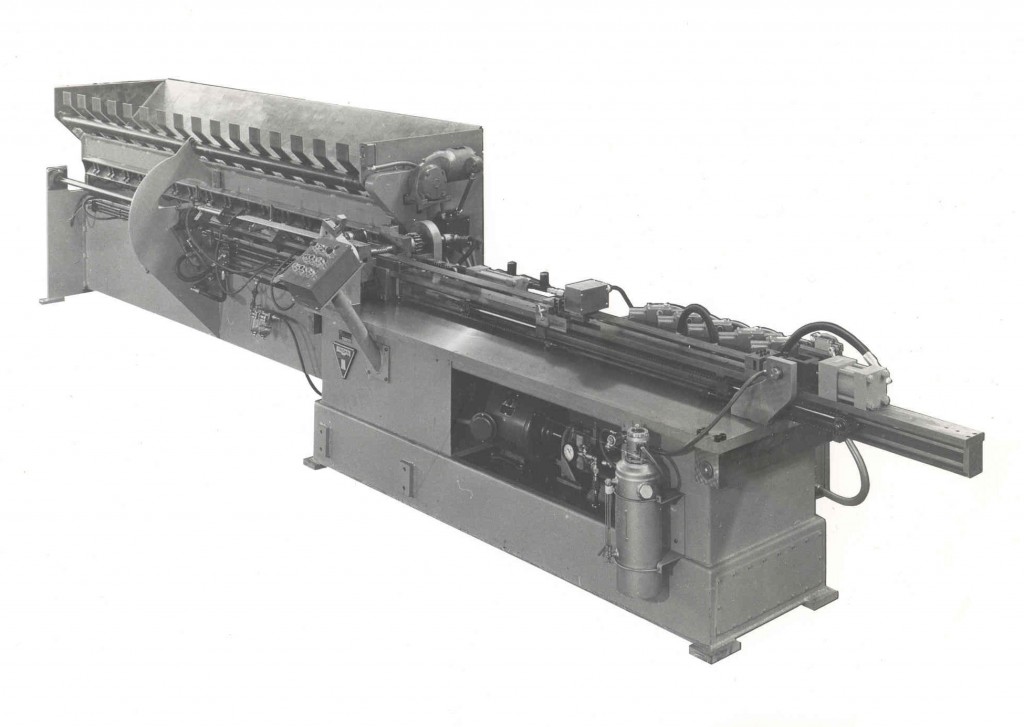 GENERAL MACHINE DESCRIPTION:
The production application of the TRIDAN Model AHBH-1 and Model HHF-1 is to produce hairpin bends from pre-cut straight tube lengths of copper or aluminum having outside diameters between 5/16″(7.94mm) and 5/8″(15.875mm). The AHBH-1 bends eight (8) hairpins per cycle on 5/16″(7.94mm)OD tubing, six(6) per cycle on 3/8″(9.525mm)OD, five(5) per cycle on 1/2″(12.7mm)OD, and four(4) per cycle on 5/8″(15.875mm)OD. It is a fully integrated system consisting of a Hopper Feed Unit and Hairpin Bender. The Control System is designed in such a manner that all operations are sequenced fully automatically or may be individually placed under manual control.

The Model HHF-1 Hopper Feed Unit is designed to meter and pre-feed the required number of tube lengths to the Model AHBH-1 Hairpin Bender, which loads the tube lengths over the bending mandrels, forms the hairpin bends, and ejects the completed hairpins.

Extremely high productivity is achieved from the Model AHBH-1 by virtue of the tube feeding system employed. The bender and hopper units are connected together into a fixed relationship with one another, end-to-end, and the hopper feed unit is stationary. This provides two outstanding advantages. The elimination of alignment problems caused by movable hopper feed units; and a halving of the tube travel length, which reduces cycle time and thereby increasing machine productivity.