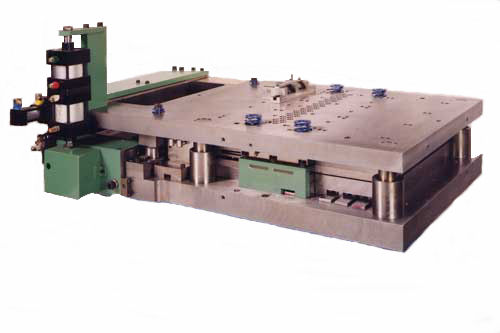 During the past thirty years TRIDAN has been steadily developing and improving fin die technology and design. In 1971 a Self-Contained Pull Feeding System was developed, which simplified and radically reduced the time requirements for die changes. This S-C Feeding System eliminated the concept of “captive” dies within fin press. In 1974 a SuperForm Fin Collar Forming Station was designed and developed, which further improved TRIDAN’s existing die design.

The combination of these two unique TRIDAN developments will provide the coil manufacturers with a multitude of advantages, some of which are:

NEAR-PERFECT FIN COLLARS – That provide the easier insertion of the tubes into the fin cores. Also, this maximizes primary-to-secondary heat transfer, and allow the use of the thinnest fin stock materials.

EXCELLENT FEED REGISTER – The improved stock piloting in the die. This further increases the register accuracy and the potential feeding speed of the S-C Type Feeding System.

NO STRIPPER PINS – The absence of stripper pins aids in the stock piloting function. Also it eliminates the unsightly stripper pin marks from the fin surface that are unacceptable on the newer enhanced fin forms.

MINIMIZED DOWNTIME – The self-purging compound pierce/straightening station removes metal particles. Which could accumulate in this station, and cause shutdowns for cleaning and/or bushing replacement.

TRIDAN is very proud of its many achievements in the special machinery field, but this Fin Die – RDVS SuperForm FIN DIE and FEEDING SYSTEM is probably the most significant.

GENERAL DIE DESCRIPTION: The production application of this die is to progressively form collared holes with a specific inside diameter and height, in a prescribed geometric pattern, and from a designated fin stock material, alloy, and thickness range.